Want to be a better game designer?

If so, then lets discuss the Single-Attribute-Exploration-And-Expansion Technique… or, worded slightly less crappily, “Edgecraft” (as coined by marketing guru Seth Godin).

Edgecraft is the process identifying one attribute or quality of a thing (eg. your game) and exaggerating that quality until it is something new / fresh / amazing / WTF-ish.

The idea is to push beyond “sensible” and find something that really stands out.

Let’s apply that to your game.

First, lets consider Exhibit A, a screenshot from the Unity RPG Course that Ben Tristem and I have been working on. 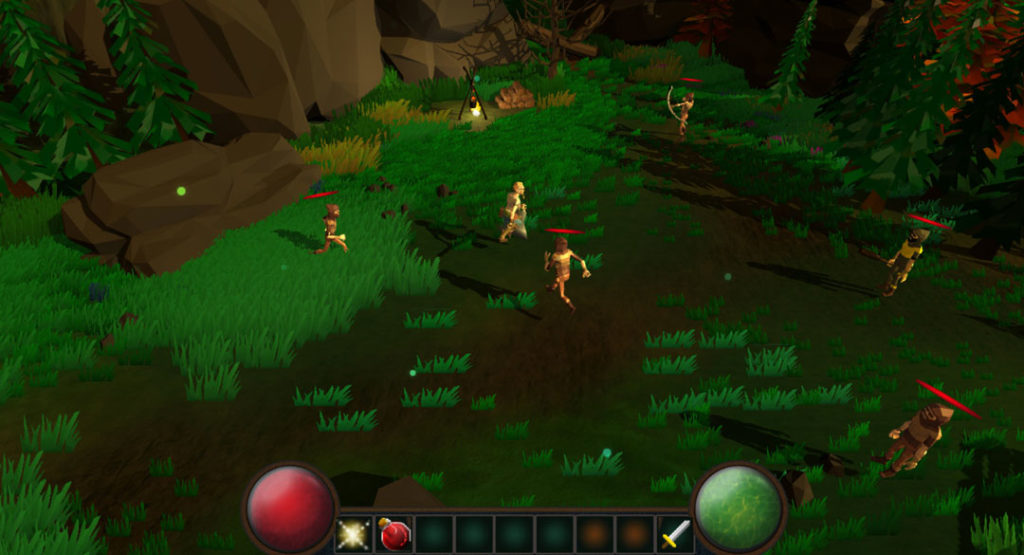 The game has the core building blocks of most RPGs – a Player Character that you control, enemies, combat, User Interface, hit points, storyline, and so on.

The magic of using Edgecraft is to take each aspect, one at a time, and ask yourself, “how could I make this different, or unusual, or crazy?”. You can do this systematically by picking one aspect, then brainstorming on that topic. For example, consider Exhibit B… 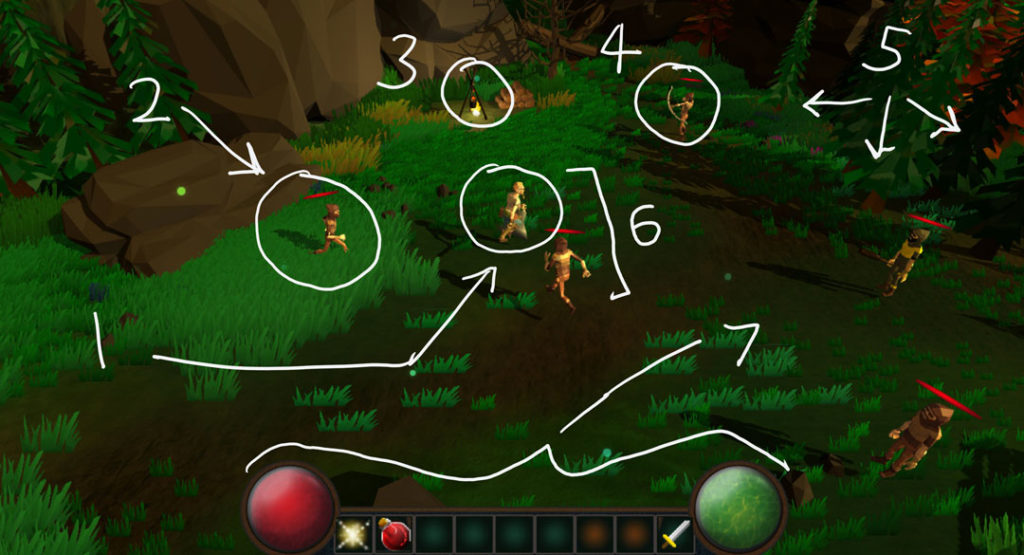 Arrow #1 is pointing at the player. Let’s dig into the player a bit.

Let’s you and I both take 30 seconds to yell loudly at our computer or mobile device as many attributes or qualities we can think of that relate to the player. For example, “movement speed” or “damage dealt per hit” or “total hitpoints”. Ready? Go….

Are you doing it?

Even if not yelling, although I do find that helps…

You’ll get a lot more out of this if you do give it a go though.

Here’s what I’ve come up with in 30 seconds that relates to the player:

If we kept going, I’m sure we could come up with more, but thats a decent starting point.

Let’s drill down into one of the attributes we identified above. I’m going to pick…

Cool Downs For Special Abilities (which means, after using a special ability like a Ground Pound or Self Heal, how long until the player can use it again).

Our goal here is to come up with something interesting that we could do with this trait. So, again, lets take 30 seconds to yell out as many things we can think of as possible.

Okay, here’s what I’ve come up with:

Okay, thats enough for the moment. As I was going along, I was trying to think of something that more than just “sensible design”, I was looking for something odd, interesting, different.

That’s how you come up with something new and interesting, rather than just remembering all the things you’ve played in other games.

The one which catches my attention is the “mash the button to improve cool down” because it would create an emotion or feeling for the player. If our overall vibe for the game is intended to be “Tense” and “Panic” then asking the player to mash a particular button when they are deep in combat in order to be able to use that special ability which is going to smash all enemies and save their lives, well, it might increase that feeling of panic.

Of course we’d need to use it sparingly, you don’t want the player mashing the button the entire game, that would get repetitive……. or would it? Hmm…

And That’s Where Prototyping Comes In

Once you’ve thought of something that would be neat, you need to quickly prototype it to see how it feels.

I’m a huge, huge fan of taking attributes which you’ve already implemented in your game and pushing them to extremes. Looking at your design document or in-engine inspector (like the one below) can give you ideas for quick wins. 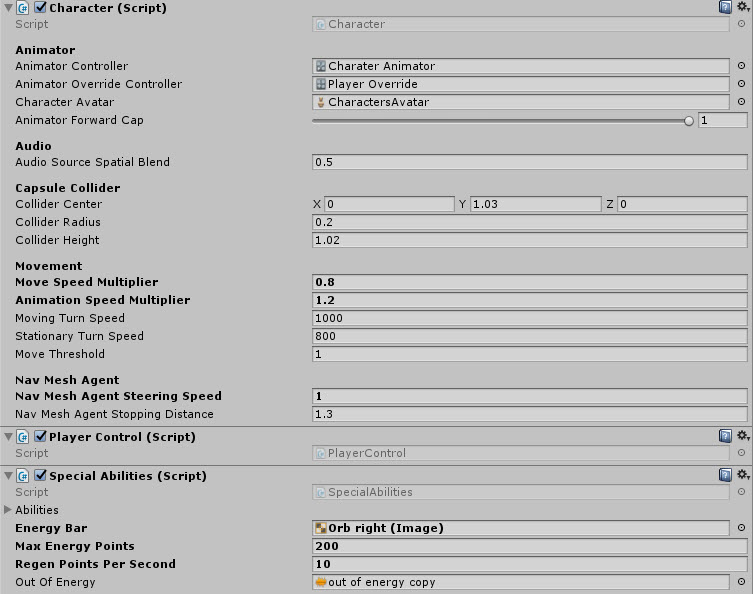 For example, what happens if the player has 1 hit point – lets try it!

For example, what happens if the player moves 10x faster – lets try it!

For example, what happens if the player’s model is one quarter its current size – lets try it!

And there are millions of attributes to play with…

In our in-game screen shot up at the top of this articles above I’ve highlighted 7 – pointing at enemies, the user interface, the environment, the lighting and so on. We took time to brainstorm just one aspect of our game (the player character) and on one of its attributes (abilities cooldowns).

If you go through this process systematically, there are nearly infinite ways in which you can make your game special for your players.

Well, perhaps not infinite, but lots.

Don’t try to reinvent every aspect of your game, it will take you forever to build and quite possibly confuse players who have certain expectations.

Even if you can brainstorm dozens of cool ideas, you only need one or two points of nifty innovation in your game for it to stand out and be a success.

I look forward to seeing what you come up with!

Why do we sometimes procrastinate? You know, those times that we avoid getting things done. Why is it that at times we just cant ignore our distractions? The short-term excitement 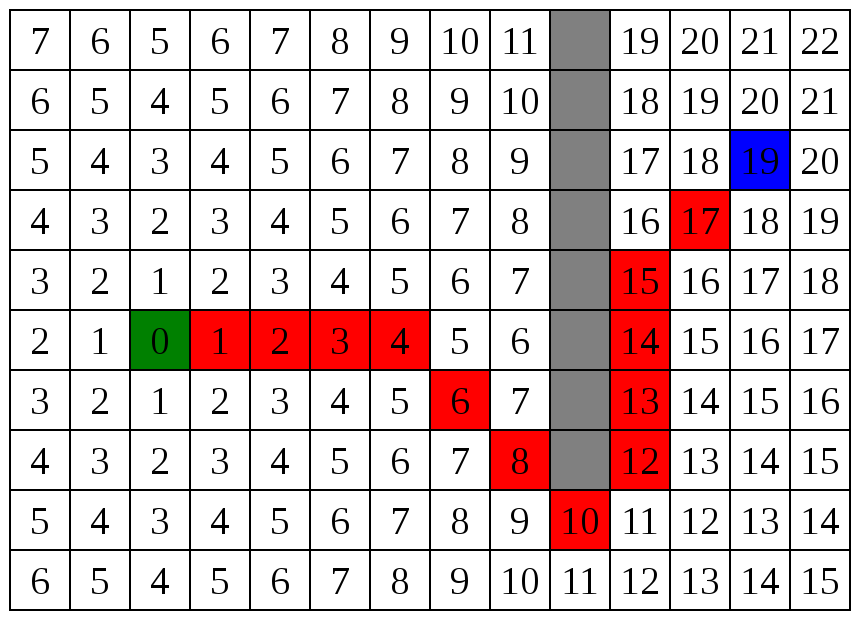 Looking to get a game character from A to B? Want it to work-out its own route around obstacles? This is called pathfinding, and everyone keep harping on about A*