It’s awesome to see our students taking what they’ve learnt on our courses and using it to help other people learn. In this post we’re sharing John Gale’s story of how he came to create ‘Hiragana Breaker’ – a block-breaking game that helps you learn basic Japanese characters.

My major in university was for audio recording with a minor in music. I have a Master’s degree in Japanese, a Japanese Language Proficiency Test (JLPT) Level 1 certification, and lived in Japan as an English teacher for almost four year. All of that was because of Japanese video games like Final Fantasy and Mega Man on the original NES. So yes, I have been into video games since I was a child. But growing up in the 80’s and 90’s before the Internet and YouTube were everywhere, I never made the connection that computer programming or designing games was something I could learn to do. It seemed so distant and disconnected from anything I was studying or pursuing as a career. Looking back now though, it’s something I could have done, been good at and had a successful career with. But thanks to the course I realize it’s never too late to get started.

I was already familiar with Udemy and had taken a couple of courses on Excel (pivot tables and such). I’ve always wanted to have a Japanese language educational business to help others learn the language, but wasn’t sure what it should do specifically. Teach? Tutor online? Sell books? So to explore this idea, I took a beginning business accelerator at the Entrepreneur Center in my city of Nashville. Long story short, through that experience I arrived at the answer of “Design video games that help people learn Japanese.” I had already been attending a local Nashville Game Developer group meetups, and it was there I started putting my ideas out there and asking for help. A friend in the group said “I can help you, but you’ll need to learn to talk the talk of game design. There’s this course on Udemy that’s on sale right now that I recommend for you.” That’s how I was introduced to the course and started taking it right away. That was back in December of 2015.

I never studied programming in college, though I’m fairly tech savvy. I’m that friend you ask tech questions to and get to set up your wireless Internet router and home network.

Overall, I love the course. Without it, I would seriously never have achieved this dream of designing and releasing a game, as cliché as that sounds. Being an online course allows to me follow it at my own pace when I have time between working freelance teaching, translating/interpreting and developing the business. I’m in the Unity Course Facebook group and post and follow when I can. It’s great to connect with other people taking the course, but it appears like most of the discussion deals with issues not in the course, so sometimes it’s hard to participate.

Ben is a great instructor and I enjoyed his TEDx talk on the learning process. I’ve brought that up in local language learning seminars and workshops I present at. At the Global Game Jam one time, I called the “Z” axis the “zed axis” while talking with my team, which they made fun of me for thinking I was trying to be haughty using the British pronunciation instead of the American “zee axis.” That comes from hearing Ben and Brice say “zed axis” all the time, which was pretty funny.

The only things I don’t like are when I do everything Ben does and things don’t work. This happens more than I’d like. I think a lot of times because I’m using a later version of Unity. Sometimes I can find the answer in the course discussion, but other times I can’t, which is frustrating. However, this is when I ask my friends at our Nashville Game Developer meetups what to do.

Right now, I work on the course only when I “have time” which I know sounds vague. Before releasing the Hiragana Breaker prototype for people to try out, I was definitely committing to two hours per day minimum. Between the prototype release in April 2016 and shipping to iOS in November 2016, I kept running into skill walls with trying to implement user feedback into the game. So I finished all the remaining 2D games in the course then, probably putting five hours per week into it. Before the 2017 Global Game Jam, I started Bowlmaster to build my Unity skills and got through about half of it, probably doing about one hour per day average. One video lesson of 15-20 minutes takes me about an hour with pausing, re-watching, and trying the challenges. So in the case of Bowlmaster with its 50-some videos, I know that will take me over 50 hours to complete. All of these times I’ve used the course to overcome a skill wall or brush up before Game Jam have been beneficial. But it’s still a situation where the more you learn, the more you realize how much you don’t know.

Fancy improving your Japanese? You can find John’s game on the iOS and Android – the game is free for the first five levels (then $1.99 USD to unlock the rest). We’d love to hear what you think in the comments below.

Game ideas can come from the strangest of places! Here, Unity student Pontus, shares his game dev journey to finally finishing a game… What’s your background? I 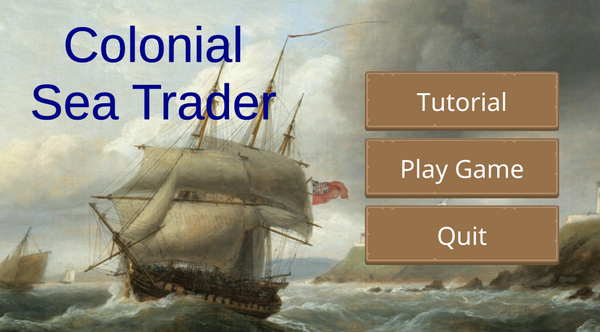 I recently had an opportunity to showcase my game Colonial Sea Trader at the IGDA-DC District Arcade. I learned a lot from that, and want to pass on some tips