Game ideas can come from the strangest of places! Here, Unity student Pontus, shares his game dev journey to finally finishing a game…

I work for ILM (Industrial Light & Magic) as a VFX artist, an exciting job which has allowed me to work on some great films. So why would I make something as silly as Flappy Fart? Well, I remember picking up a software around the age of 10 I believe, called The Games Factory, where you could put together very simple 2D games. The idea that I could make something that others could then play was a thrilling thought! I started making games like a mad person, I had so many projects going on I lost count, I loved it! And I finished zero projects… And as the years went by I started forgetting about the video game making dreams and decided to pursue a career in film instead, I had some basic understanding of editing and 3D softwares, it seemed like the right thing to do. Besides, the idea of programming in games was always daunting.

It was only one day at work, years later, when a friend of mine mentioned an online course teaching Unity, a game engine. I don’t think even a second passed before I had already made up my mind that I would take the course and finally finish my life long dream.

Ben’s course is top quality and really entertaining. I have done many online tutorials in my days, and none of them even come close to this one. By the time I had finished the FPS Zombie chapter I felt that I had a basic foundation and the ability to make at least a fairly simple game from start to finish. Now keep in mind that I had no previous programming experience.

I was very pleased with the result of the zombie game and decided that it was time to try something on my own.

I figured that before I try to make a game completely from scratch from my own ideas, I would do a clone, just like Ben did with Plants & Zombies. To try and recreate an already existing game more or less, just to get my feet wet and to not get stuck in the design process.

I decided to do something silly, stupid and dumb that I would surely take no pride in doing, just to avoid getting stuck and overthinking things.
Working on it in the evenings it took me roughly a week to finish, pretty good, this included doing the art, the programming and putting everything together.

I submitted it to the Apple store and got a massive rejection 🙂 Oh well, no matter, it was just for the learning experience.

I’m currently diving into VR, I am making a simple arcade game for the Vive. The plan is to release this on Steam once finished.

Are you thinking of getting started with game development? My advice would be to do the same as I did. Take Ben’s course, finish it!! And then pick a simple game of your own choice and recreate it. This will give you a lot of confidence when you finally start tackling your own first game.

If you want to follow my journey you can find me on Twitter, I also have a youtube channel where I will be uploading some making of videos and other game related things. And you can play Flappy Fart here 🙂

Thank you for reading 🙂
Pontus 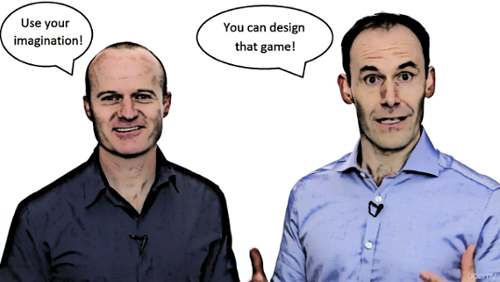 In the Unity RPG Core Combat Creator course lecture, “Start Designing Your RPG”, our instructor Rick Davidson teaches us how to fill out a Game Design Document and

It’s awesome to see our students taking what they’ve learnt on our courses and using it to help other people learn. In this post we’