In this last section, I'll briefly discuss some of the design elements I haven't covered and also provide some final impressions of what I've learnt overall.

Yeah… this shouldn’t be the shortest section considering what I've been responsible for with my tabletop experience. All I can say is that it just wasn’t the focus of this project. I was more interested in expanding my knowledge both around engineering and creating art.

There is a story here, it’s just flat and uninteresting.

If I were to include a real narrative in this game, here are a few things I would almost certainly do:

Two pilots talk to one another at the beginning of the game, between each of the 5 stages, and at the end of the game. There is more than enough room for me to create a story with stakes.

One idea I have is to make both characters more connected to one particular world. Maybe if the player saves enough escape pods from a given world they are saving someone or something important to one of the pilots. This is a way I could connect the narrative to both gameplay as well.

Another idea is to give each of the bosses relevance in the story. I took the time to make 5 different bosses with very different mechanics. I could easily create a story tie to the pilots, game world, over-arching story.

Oddly enough, making this game was a constant reminder of the importance of narrative. I realize that classic shmups don’t always have much of one, with plenty of exceptions like Spriggan Mark 2 which has some very long dialogue sequences for any game of that era.

In fact, I have already created the basis for a narrative: opening background story, a solar system with named planets and organizations, two pilots (in desperate need of personality… sheesh!), and a fairly diverse set of enemies.

Additionally, the gameplay is already set up for narrative: “Save and work alongside the peoples of a solar system while fighting off their oppressors.” It already isn’t just “blow up everything on the screen.”

A great narrative is absolutely possible in this game- it just needs a lot of thoughtful writing and some elbow grease! I'll probably map this out as an exercise in the near future.

This is yet another section that I did not spend a great deal of time on, maybe half a week? Again, it just wasn't my focus the first time around.

As I mentioned above, music is actually an area in which I have a fair amount of experience. However, there was still a very significant learning curve as I had no experience in sound engineering.

So, I had a big choice to make- what software to use? I ended up being extremely happy with my decision. I have found FL Studio to be extremely user-friendly and easy to learn.

What’s the main downside? I had to buy it. You can use FL Studio for free, but any work you don’t export into a file (.wav, .mp3, etc…) goes away every time you close the program.

If you want a free program with pretty good capabilities, try BandLab:

My process for composing and creating the soundtrack for this game:

I am not going to get deep into my personal songwriting process in this blog. That’s an enormous topic. Instead, what I’ll say is that I made a couple of assumptions about game music I wish I hadn’t.

There are so many things I could say here about composing music, but I think that would just have to be a separate, in-depth blog. I tried providing a list of websites to begin the journey but it just felt misleading without a lot more information. Also, I still know VERY LITTLE about sound engineering which is half the battle in-game music and audio.

What would I do Differently:

Oh my… this is a long four part Blog… Well, if you read this far, thank you so much!!! Making this game has been very satisfying, even though I’m quite mixed about the final results. I don't view this project as a game I would release, yet I learned a huge amount of information and developed a lot of skills.

The single biggest thing I learned is that I will continue my game making experience as part of a team. I have made progress on that front already largely because of my experience developing this little schmup.

As I mentioned in an earlier post I’m working on a puzzle game now which is more in my wheel house and also connected to my tabletop experience (loosely...). My process so far has been:

(1) Make a prototype with art I purchased from the Unity Store.

(2) Put together a set of design documents: game design doc, white paper, tech doc, vertical slice, and a skeleton of pitch deck (verbiage but no art).

Why did I spend the time to put these items together? It has let me show my idea rather than tell. It may sound like I'm prepping to pitching my idea to investors and/or publishers. Well... not yet! Instead, I've been able to secure both an engineer and business partner so far. I also have multiple artists, one in particular, who are interested in participating in the project.

The next steps? Once I secure an artist, my team and I are likely one to two months away from having a product that can be pitched to publishers and/or investors.

Again, I would not have time to focus on these items if I didn't have a team.

I am extremely glad I spend a great deal of time on this game. It is not a wonderful polished product, but working on every piece of development has been absolutely invaluable to me. I have learned a great deal about both what parts of the development I'm interested in and also which parts I'm less invested in focusing on. If you can't tell, I most enjoy: development, narrative, writing, and now engineering!

If anyone has questions, feel free to reach out!

You can find my website where I'll be posting announcements and updates here (bare bones and under development, but live):

Also, Below is a link to itch.io where you can download my little schmup project Aether Run for free.

Take care and good luck with all your projects! 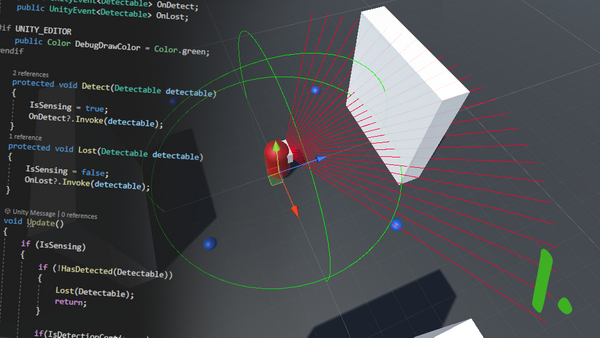 In the first of two parts miniseries about AI senses, I'm going to guide you through an implementation of eyes and ears for NPCs, that takes advantage of inheritance and UnityEvents. In the subsequent part, I'll show you how to create some reactive behaviors using the state pattern.

Pixel Art (…or Pixel-ish art???) Oh, what was I thinking…? If I had not attempted to do the pixel art for this project, it would have cut the timeline in